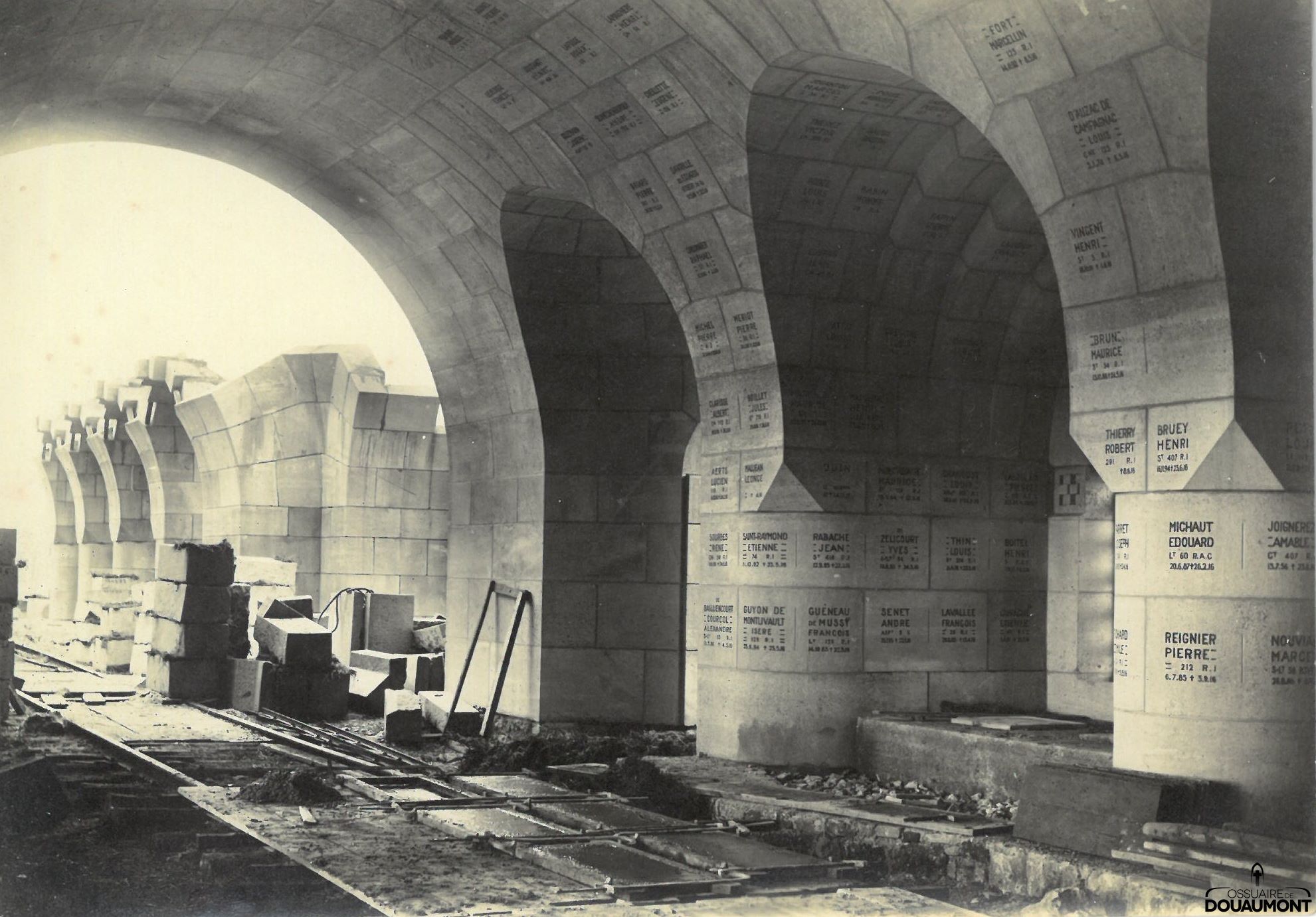 The Battle of Verdun : February 21 – 18 December 1916. 300 days and 300 nights of relentless battles. Incessant surges of artillery and shells. A frightful death toll, both on the French and the German side. 300 000 men lost their lives amongst which many disappeared or will never be identified. 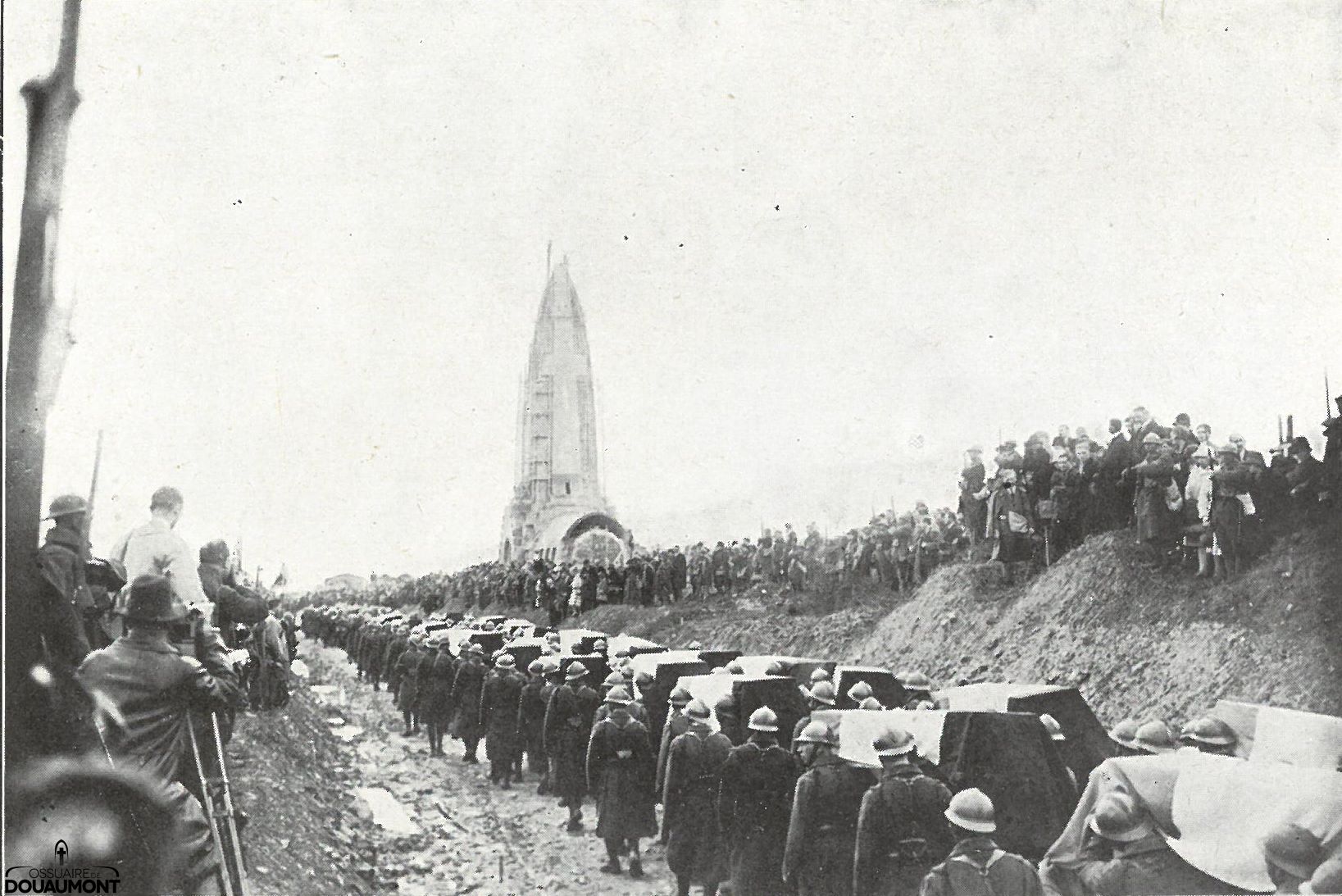 End of 1918 : In the first hours of the Armistice, the bishop of Verdun, Monsignor Ginisty went to the battlefield to find a terrible sight, thousands of bodies who will unfortunately never be identified. This discovery led to the idea of a sanctuary for these unknown soldiers.

August 22th, 1920 Symbolically, the first two headstones of the future monument were sealed by the founder Monsignor Ginisty, Marshal PETAIN and the Lafayette Escadrille. An architecture competition was initiated by AZEMA, EDREI and HARDY for the construction of the monument.

1924-1932 : While the first unidentified remains found on the grounds were temporarily placed in a chapel, the construction of the monument continued with the money collected throughout the world by Monsignor Ginisty, his team and the Ossuary Committee. On the monument’s main facade, there are coats of arms from the 147 cities, regions and donator countries having participated in the financing of the edifice.

1927 : The Ossuary, at this time still under construction, welcomed its first large ceremony in front of nearly 30 000 people. The first unknown bodies were repatriated from the temporary chapel to the final monument.

1984 : Famous historical handshake between president Francois MITTERAND and Chancellor Helmut KOHL. The first big step towards reconciliation and fraternisation between our two countries.

2016 : Second French-German meeting for the centenary of the battle between president François HOLLANDE and Chancellor Angela MERKEL.

The flame of remembrance 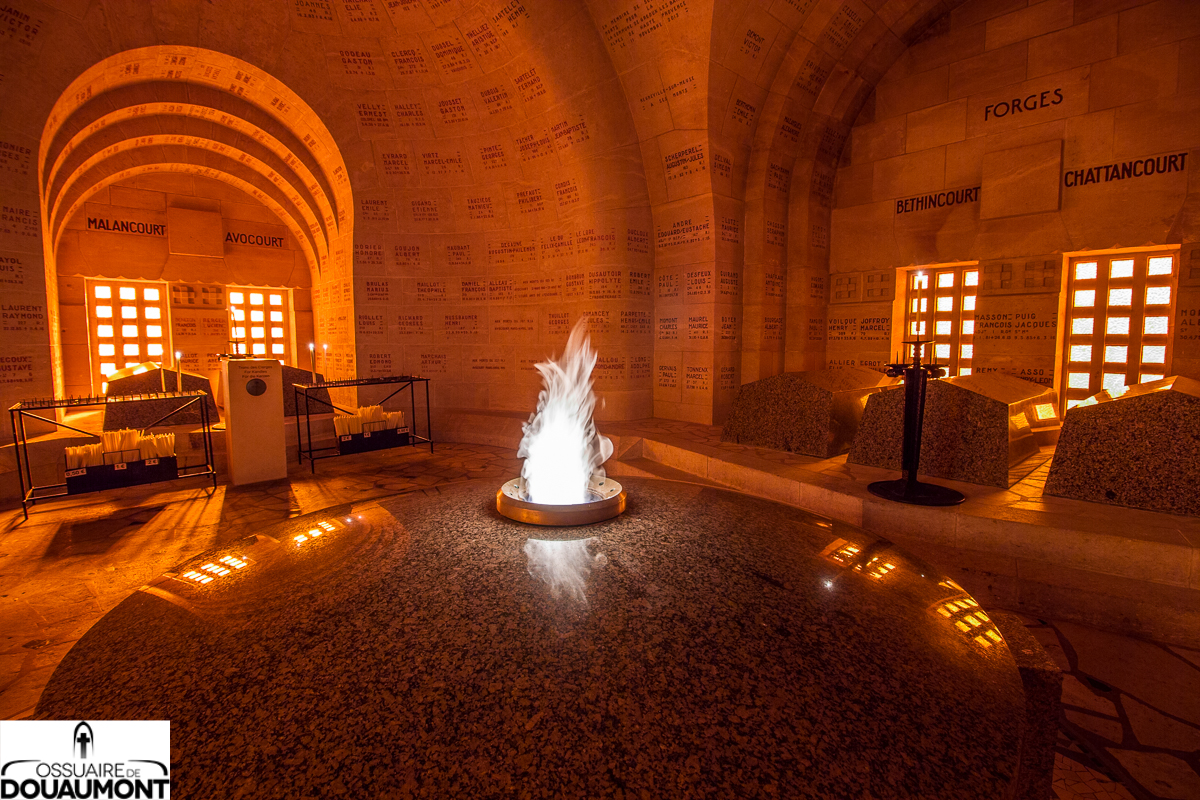 The 137 metre long Ossuary makes up the central part of the monument. Inside the cloister, 22 alcoves house the tombs that represent the 46 sectors of the battle of Verdun. In these tombs lie 130 000 unidentified soldiers gathered from the battlefield after the Armistice. Around 4000 inscriptions cover the walls and the arches of the cloister. A hundred headstones engraved in hommage to a regiment, a memorial or patriotic association. In addition to thousands of headstones bearing the names of French and German soldiers gone missing in battle on the battlefields of Verdun.  At each end of the cloister, stands an enormous recipient, inside which burns the flame of remembrance of famous dates and ceremonies.

A place to reflect 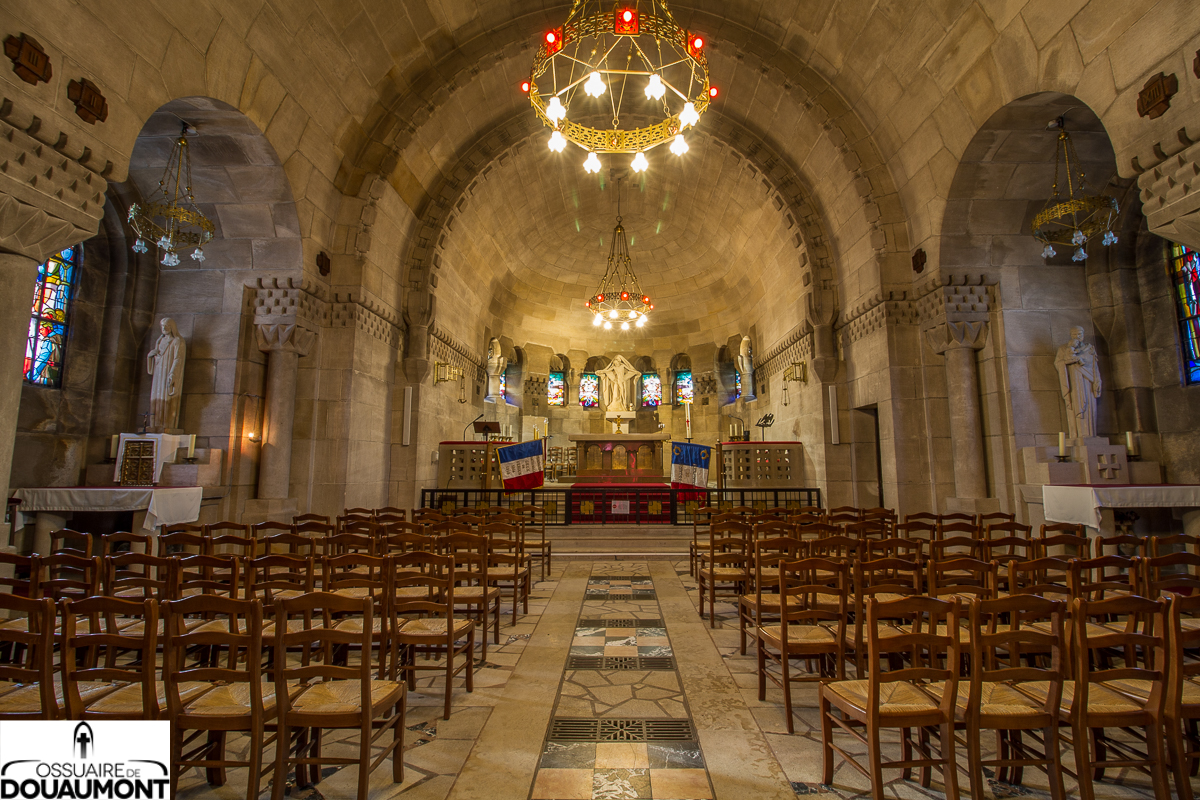 The chapel of Roman-Byzantine style is one of the first parts of the Ossuary to have been built along with the tower. This place, abundant with symbols was a gift from French, Belgian, Swiss, Canadian and American Catholics. In fact, this is the resting place of ossuary founder Monsignor GINISTY and Canon NOEL both strived for the soldiers buried in the monument wishing to accompany them to their sacred resting place. Another noteworthy fact concerns the chapel altar on which the names of a hundred members of the clergy slain on the battlefield can be seen on a golden plate. The stained glass windows are also a main element of the chapel. Created by the artist Georges DESVALLIERS and donated by the soldiers’ families, they depict historical-religious scenes melding the battling soldiers’ destiny with the heavenly welcome awaiting them. Last but not least, you can take a look at the chapel statues sculpted by Elie Jean VEZIEN.
Especially the magnificent work of Pieta on the main altar. 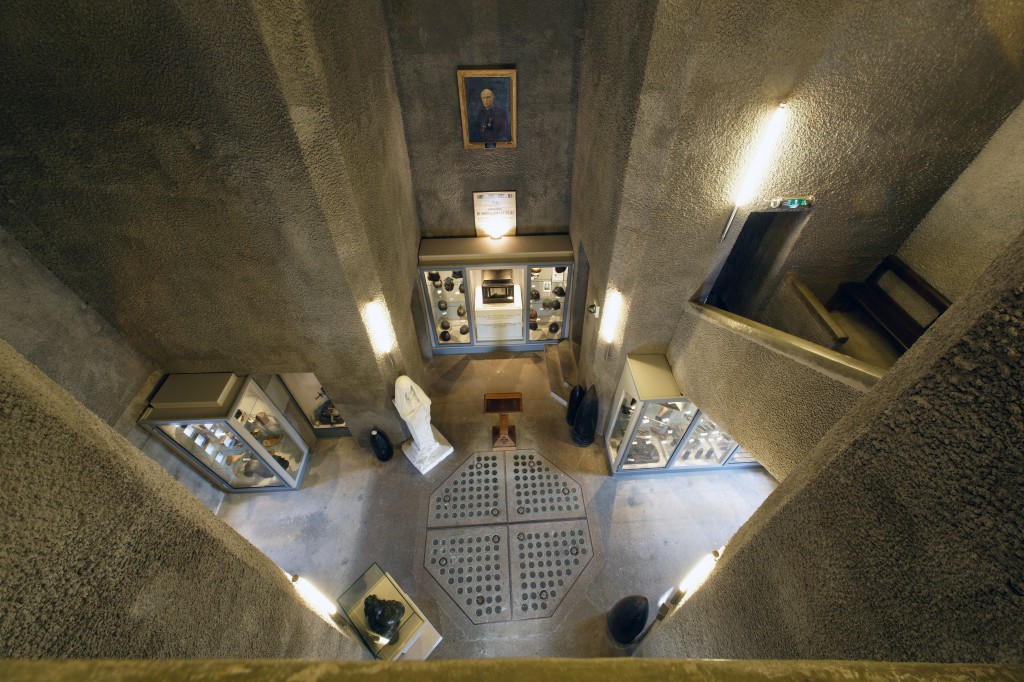 Also called “The lantern of the dead”, the Ossuary Tower with its 46 meters offers a stunning view onto the battleground. The tower was a gift from the Americans. It was one of the first parts of the monument to have been built with the chapel. Halfway up the tower, a few window displays show equipment and small scenes highlighting soldiers of each camp. Finally, at the top of the tower, in addition to the lookout stations and rotating tables, you can find two symbols of the monument: the beacon and bell. At night, the beacon lights the battlefield with its red and white lights. These can be seen from miles away. Louise Anne Charlotte, the bell of the Ossuary, in French known as the Bourdon de la Victoire was donated by American Mrs Thorburn Van Buren. Cast in Orléans, it was celebrated by a procession in each city bringing it closer to Douaumont. Baptised in 1929 by the founder of the Ossuary, Monsigny Ginisty, its role was to ring three times, and during large ceremonies, to honor those who gave their lives in battle. 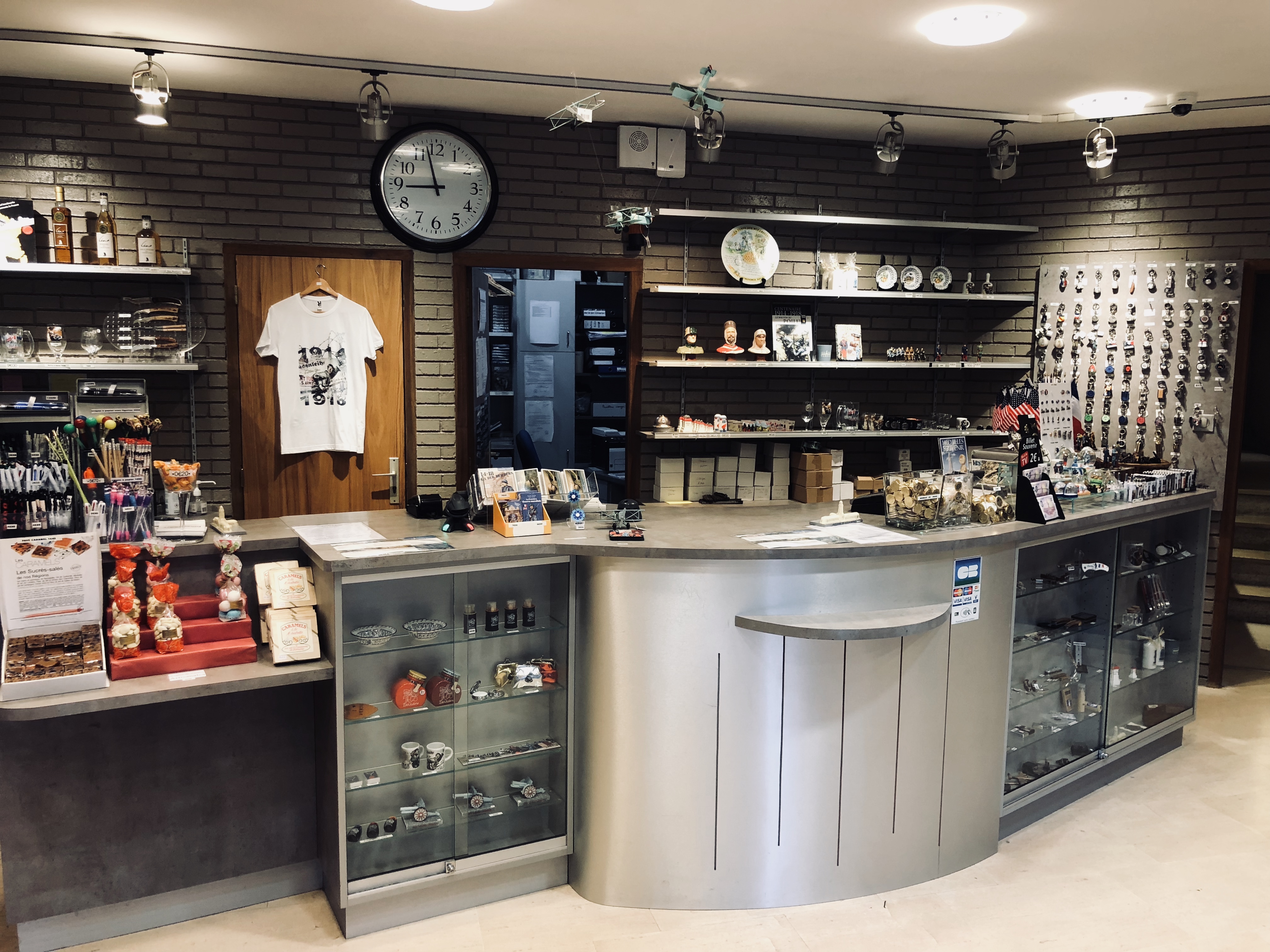 In the basement, before entering the cinema, you will find a shop and the monument’s main reception area. Here, information and a variety of souvenirs are available. Moreover, the shop boasts a wide range of works for book lovers. 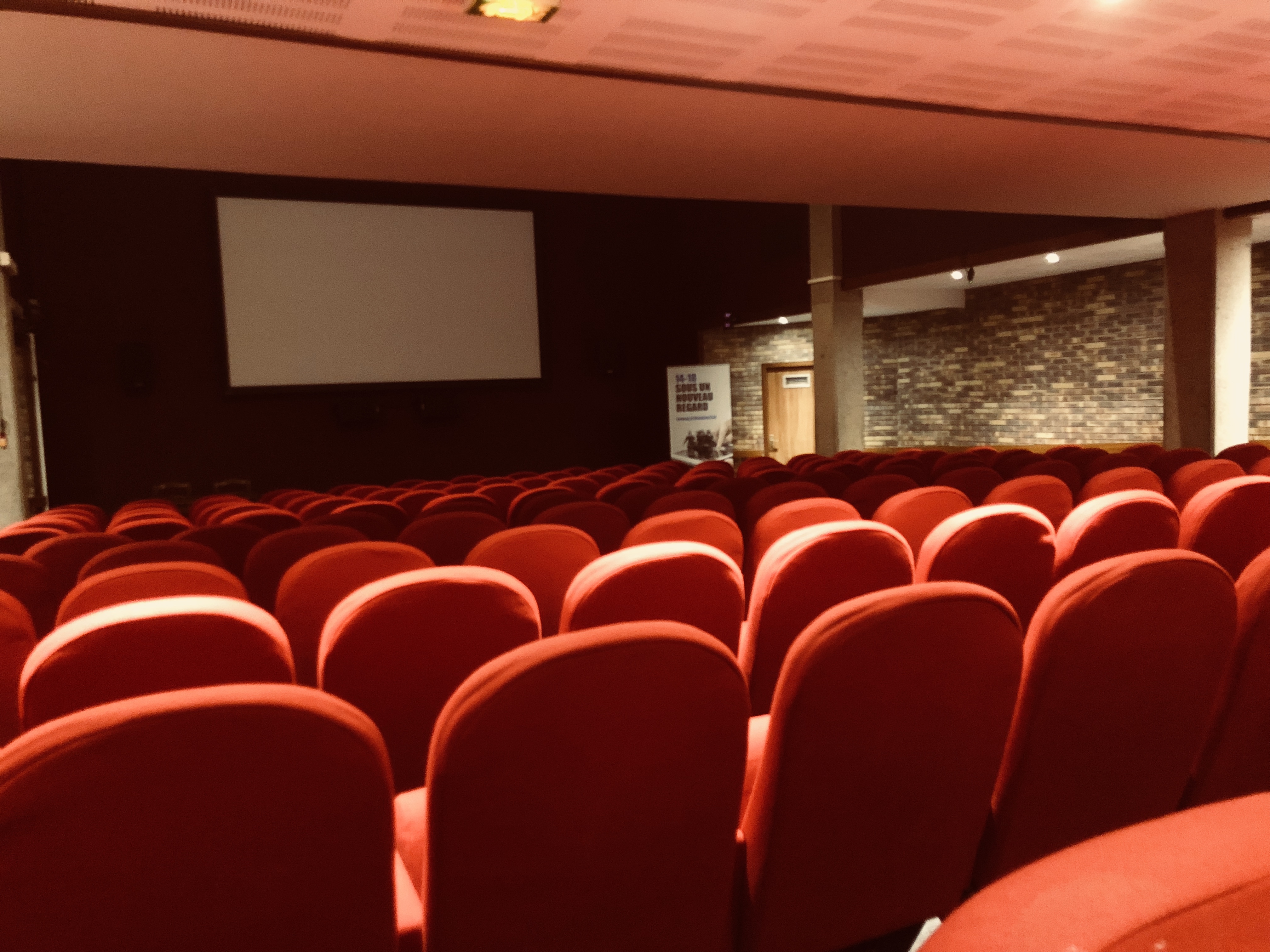 The Ossuary includes a cinema where a 20-minute short film is screened about the Battle of Verdun and the vocation of the monument from its creation until now. Apart from the screening, sometimes conferences and symposiums are held in the ossuary. The cinema was entirely refurbished in 2015 and can now accommodate 140 people in the best conditions possible and boasts high-tech audio-visual equipment.

A new show in full HD.